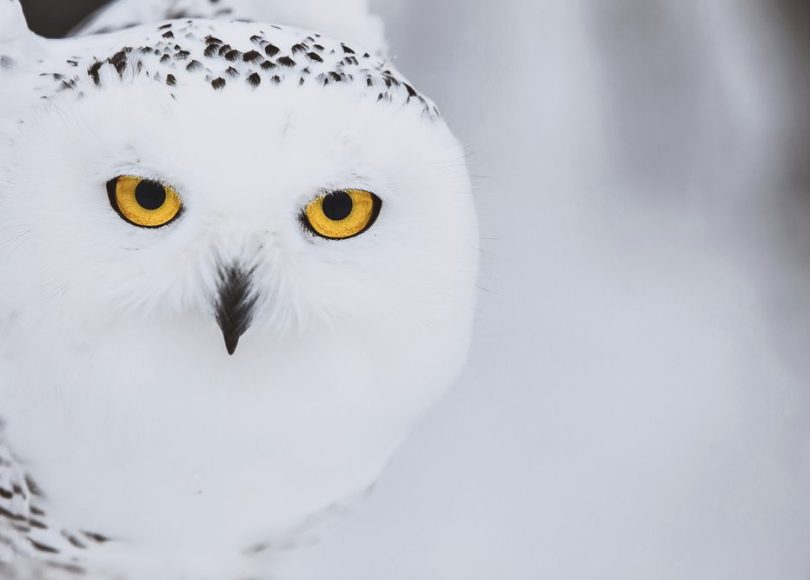 Exactly a year ago I witnessed a huge snow owl swoop down in front of me and land on an adjacent apartment building. It was night time and I was standing in the parking lot of a hotel in the middle of Grande Prairie, a small (but large for its size in the north) city. Immediately I pulled out a cigarette, emptying its contents into my palm, and laid a quick offering and said a prayer. I had never seen a snowy owl before and had never expected to see one in the middle of a city.

I had always heard that the owl is some kind of messenger of death and its presence is one that should be seen as ominous and foreboding. Hence the parking lot prayer and offering from my rattled self. I stood and watched the owl right up until it decided to spread its big white wings and disappear into the night’s sky. After I could no longer see its white outline I walked to meet my friend for coffee who challenged me to rethink the meaning of the presence of owls.

Did I know where the owl as the messenger of death belief came from? No, not really. I do know that a medicine person, whose medicine was the owl, is who my father blamed for my Great Grandma’s death. She is the woman whom I am named after. Other than this I have heard the odd comment about owls which is usually tied to … death.

My friend said that it could be a metaphorical death, the change and shift of what you know to be your current reality. It could be something being reborn or rebuilt, a marker of something completely new. After hearing a few more people echo this sentiment, I decided that I would accept this as the meaning of the owl’s presence. I don’t think at that moment I could understand how much was going to change in my life.

A few days later the Rocky Mountain Fort Occupation began, a 63 day land based camp where we halted the clearing in preparation for Site C while exercising our treaty rights. I had no idea that I would take some youth to this camp and then end up being asked to be a spokesperson for the camp. I almost quit my job twice to maintain a presence at the camp and it all kept me in a state of high anxiety and on the continual cusp of burnout. In the quiet moments out there on the land, surrounded by the old growth cottonwood and looming birch trees is when I would decompress. The forest healed me daily. The thirty minute walks to and from camp gave me life. Waking up to stoke the woodstove in the shack or in the canvas tent in the frigid winter air actually made me happy. It was the purpose of being there and the confrontation that weighed heavy on my spirit.

Some people must think that people like me (I don’t know what people like me are called these days…. Protestors? Activists? Land defenders?…) love confrontation and making a big deal out of things. I am sure there are a few people that actually do but I am not one of them. I actually strongly dislike confrontation and I have had previous attachment issues that had made criticism and disproval very hard for me to handle- thus I was an alcoholic from a young age. But in this new space I had no choice but to stand my ground, because I truly believed it was necessary to stand up for the land, water, and future generations and I truly believe that the Site C Hydroelectric dam is completely unnecessary. So there I was living in some weird conflict zone faced with security holding cameras in the middle of the bush and then talking to some aggressive (some very neutral and nice) journalists and having the finger pointed at me by all these people who could honestly not give two fucks about Treaty Rights, about land preservation…and especially not about Indigenous women.

If this point of time in my life had a soundtrack it would sound something like this:

I really don’t care if people expect me to be always brave and courageous and want to see that reflected here. I am not going to paint a false picture for you because I have had some very hard lessons in humility and prefer to remain as human as I really am. But what is bravery without the conquering of fear? I sometimes think that this admission will mean my opponents will see this reality as a weakness and I should not say these things because it will be used to discredit me or will lend to the thought that I am not a capable person….but then I think, that will work in my favour as I am a woman born of fire and am not easily consumed by the heat of any challenge. Doubt me. I dare you. Anyways, at one point, I remember sitting in a parking lot with one of my best friends on speaker phone and crying from the deep place in my gut because I was so beat down and tired and wanted to give up.

“Just let it out,” her voice told me…

That was the greatest gift, to be given the space to cry and you best believe I howled like a lone wolf longing for the company of a full moon. I cried in that snowy parking lot until I was emptied of my grief and then I carried on.

I’m going to digress here to frame this growth that I have experienced in the past year. I am almost 5 years sober but a few years before this journey of sobriety, I was 2 and ½ years sober. Even though I was sober I hadn’t worked on any of my trauma and was still a walking mess of behaviours and reactions. I thrived on public acceptance and all it took was a series of small rejections by other people and I relapsed and stayed on a drunk for two years. So being in this new space of continual criticism and lateral violence was a great test for me. I believe that had I not relapsed previously and was forced to work on my trauma and issues I never would have made it through this past year. I would have been swallowed whole and been on a drunk somewhere all riddled up and defeated by life because alcoholics and addicts are really just pinballs who have never really figured out how to work the levers on the god damned machine to control their lives until they do the work on themselves, but I did do the work…… and I am still standing.

The majority of my life has been hard, and I’m not saying this to score sympathy or props but I am saying it because it is true. I have lived a hard life and endured trauma that would kick the legs out from under strong men but it has all been preparation for the work I am doing now. The work for the land and for the people not only as a “land defender” but also as someone who works in social work and tries to give back the teachings surrounding healing that I have been graciously given.

I don’t know if anyone even will read this far in this post as I am definitely writing-the-fuck-out-of-this-past-year but it’s something I need to do.. for me.

I had also ventured back into dating and that didn’t pan out. I actually didn’t pan out in the middle of me being all beat down and broken.. and it was then that I learned that I can take care of myself. There’s already been a few times this year where I have leaned on the moment I was in a bubble bath crying from the heartbreak and stress with the worst cold I’ve had in years and I realized … I can do this all on my own. Given “on my own” also means with supportive friends and a mother who will hold me, a grown ass woman, while I cry until I feel better again.

I have pushed myself above and beyond multiple times achieving my career duties, starting a Master’s degree program, raising my son and taking him to soccer games/bike riding/mini-vacations, doing a cross country caravan and speaking in multiple cities about Site C, talking on countless cameras and on the phone or in person to a myriad of media people, and of course continuing to write and submit my work elsewhere. Just today I finished filming a CBC short doc and this leads me to the next reality check I had…..

I have had two panic attacks in the past four months. These panic attacks used to be regular occurrences when I was an alcoholic and in the early stages of my sobriety but it has been a solid two years since I have had one. This has been a red flag as well as a teaching for me…..

My spirit spoke to me…. Slow down. Breathe. Live.

I am truly trying to disconnect when I can and to take solace in the small moments. I am completely okay with admitting a perfect night for me right now is a movie and a bubble bath. I don’t need the thrill of being everywhere and anywhere with flashy lights while sporting high heels these days. I so much love and appreciate the calmness and feeling of home. I am leaving my current position in a few weeks for the uncertainty and freedom of doing small contracts (hit me up I’m free- shameless plug) while I finish the second semester of my program because I am worth planning for my own sanity. I also FUCKING love having elder naps. I appreciate a quiet night like this one while I write this blog post in my pajamas knowing I am on holidays and do not have to wake up in the morning. I love cuddling my son because he is almost nine and will soon be “too old” to cuddle his mama. I love playing cards with him. I love going to the water with my mama and making small talk with my funny old papa bear.

I am a simple creature. I love long drives, good music, and good coffee and it’s in these simple things that my pleasure lies.

I have grown exponentially and I am finally at a place where I can process it all and find my way back to myself as I am now. I can rest knowing that I have followed the path my ancestors have laid out for me and I will pray that I remain humble and willing to continue down it as I know they are with me. I have learned to trust deeply in purpose and trust in the stars that speak to me. (long story)

I am….ready for a bubble bath.

P.S. If I be seeing a snowy owl again I figure Ima just close my eyes real tight and give myself a year’s break. Lol. Yes. I laugh at my own dorky jokes.