Today we attended the Federal Court Appeal in Montreal and I would have to say it was a turning point for me on this trip. The journey here has been full of my own grief and the potential reality of loss but today in the court room I felt the hope expand inside of me and reignite my passion to move forward all over again.

I noticed this shift when I did an interview with a local Montreal station and said firmly, “This dam can be stopped, should be stopped, and it WILL be stopped”.

I don’t think I’ve ever, for all my time spent in this struggle, said it so firmly and believed in it. I have always been living in the shadows cast by Site C since its approval in 2014. Today that changed and I can feel that something will happen, and I don’t know in what format that justice will be served, but I know that we will keep our river flowing.

The Treaty does say after all, for as the sun shines, the grass grows, and the river flows.

Note that it doesn’t say, until the sun shines too hot, when the river is dammed, and the medicines are gone we will admit that our infringement has gone too far….. does it? Anyways.

Right now we are in Kanasatake, a Mohawk community that has opened the doors of one of their schools for us to sleep in and fed us a solid meal. Chief Simon Serge from this community spoke at the rally opening this morning in front of the Federal Court steps. His words were strongly rooted in solidarity and he talked about the upcoming Treaty Alliance. On September 22nd it will come into being and the Nations that sign onto this landmark agreement will stand together. When one stands up against a project, all stand up against a project. It is not just words to him but solidarity is present in his actions. He was waiting in the parking lot to show us in when we arrived in his community over 10 hours later. It’s how he drove elders from our caravan around his community and is still figuring things out to ease logistics on our end at 9 o clock at night. It’s these actions that melt my heart and show me that we truly are never alone and that we have brothers and sisters across the country willing to make things happen and stand in solidarity. 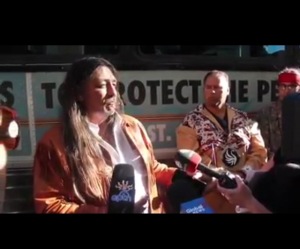 I know I am supposed to talk more about the dam, or about the water, but right now it is all about compassion and the hope that it brings to me.

Today I am grateful and I have a full heart.